January 10, 2023 By Christopher Thornberg, PhD Comments are Off

“If the economy shrinks next year, no one should be surprised. We’re facing the most widely forecast recession in history.”
Wall Street Journal, Dec 4, 2022

The year 2022 was like the proverbial month of March—it came in like a lion and went out like a lamb. The start of the year was full of optimism following 2021’s high-growth recovery (from COVID disruptions) and with asset prices hitting record-high levels. Yet, 2022 also saw a spike in inflation and the resultant Fed tightening, which led to a sharp spike in interest rates and slow output growth since the start of the year. Asset markets—particularly equities—have all started to drop off from their high points.

All the bad news has caused public confidence in the economy to wither. The 70+ economists who contribute to the Wall Street Journal’s quarterly ‘Economic Forecasting Survey’ (Beacon Economics participates in this survey) think there is a 63% chance of a downturn in the year ahead. The Philadelphia Fed’s ‘Survey of Professional Forecasters’ is similarly pessimistic. Consumer sentiment has plunged, and if this wasn’t enough, we now have an inverted yield curve—ostensibly a classic signal of an approaching downturn.

For the record, none of this should really worry you. These consensus forecasts generally have a lousy track record: they failed to predict any of the last four recessions, while predicting a number of others that never arrived. As for consumer confidence, that is a coincident indicator, not a leading one. Given that unemployment in the United States is still well below 4% (historically low) and consumer spending remains one of today’s primary drivers of economic growth, we can assume that the consumer sentiment indicator reflects the pessimism of news headlines and not what’s happening around the kitchen table.

Given this shaky body of evidence, it’s fairly easy to dismiss the calls of recession. Yet simply being contrarian is hardly a good rationale for taking a more optimistic view of the U.S. economy in 2023. Rather, our optimism starts with the basic question of what causes a recession. A recession is a period of time when an economy fails to produce as much as it could because resources of production are going unused. Hence, recessions are typically marked not just by falling output but also by heightened unemployment rates and low capacity-utilization.

Why do these resources of production go unused? This has everything to do with basic frictions within markets for resources that prevent resources from being quickly allocated from one part of an economy to another. Real estate agents, for example, cannot quickly be retrained as registered nurses, a semi-trailer cannot be used as a commuter bus, etc. Under normal circumstances these limitations aren’t that noticeable in the aggregate because changes in the structure of an economy usually occur relatively slowly.

On occasion, however, the pace of change is far more rapid, and that’s when these frictions become problematic for an economy. Predicting a recession is really about predicting rapid economic changes. For example, the COVID pandemic recession occurred when large swaths of the economy were closed due to public health concerns. Eventually, laid off restaurant workers and shuttered hotels could have been repurposed but, thankfully, the brisk roll out of effective vaccines allowed these sectors to reopen, and the economy was able to recover rapidly. Those unused resources were easily reabsorbed where they originally started.

The previous three recessions in the United States were all created by more permanent changes in the structure of the economy—after unsustainable trends finally collapsed. Such boom-bust cycles are often driven by what Robert Shiller famously coined “irrational exuberance.” Take the ‘Great Recession’, which started by way of immense investor exuberance for the new asset-backed derivatives that promised safe, high returns—proving, yet again, the age-old axiom that if it sounds too good to be true, it surely isn’t. This fueled a debt and spending binge by American consumers who wrongly believed that they were wealthy due to the huge increase in asset values—particularly home prices. Builders also believed there was more demand for homes than there was, given the sharp increase in prices, and ended up over-expanding the housing supply.

The over-borrowing/over-building/over-spending binge went on for almost four years in the United States. Inevitably, the basic laws of economics reasserted themselves and the trends had to collapse back to normal (sustainable) levels—causing a nasty recession along the way. When the rot on Wall Street became undeniable, the entire house of cards collapsed, and the nation suffered from sharp reductions in demand for housing and consumer spending even as credit markets seized up due to the loan losses. It’s little wonder that the Great Recession was the worst downturn in the post-World War II era.

So, for all those predicting a recession in 2023, the big question is why? Where will the sharp change in the structure of demand (which will cause this recession) come from? True, the economy slowed sharply in 2022. But at some level this was anticipated. The $6 trillion pandemic stimulus sugar rush was bound to collide with reality at some point. The excess cash that was thrown into the system pushed demand past the point of true potential output, creating a completely unsurprising surge in prices. Interest rates, pushed artificially low, are now back to levels seen in the pre-Great Recession days. The economy is indeed struggling at some level with these changes. But inflation, by itself, has never caused a recession in the United States, nor have high interest rates. We still need to see a large and rapid decline in demand, and in enough of the economy, to cause a recession.

To see real potential culprits behind a recession, take a closer look at the share of U.S. GDP used in highly cyclical parts of the economy over time—namely investment in both residential and non-residential structures, and business investment in equipment and consumer durables. While past U.S. recessions have not been limited to these parts of the economy, it is clear that this is where the bulk of the action occurs—mainly due to the stock/flow elements in these sources of aggregate demand.

The graph below show these components of the economy as a share of GDP over time, with past recessions highlighted by shading. A couple elements of this chart are immediately apparent. First, declines in spending in these sectors begin prior to downturns and often continue afterwards. Second, the size of the decline is clearly related to how ‘hot’ the sector was before the downturn. For example, construction was extremely hot in the runup to the Great Recession. The decline afterwards was one of the most severe ever seen. Of course, this reflects the chaos created by the sub-prime debt bubble. 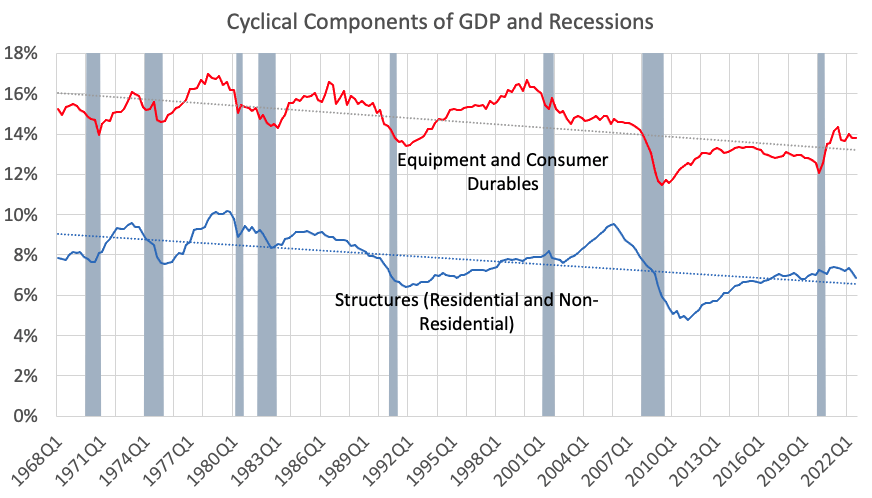 But what about today’s economy? Currently, the biggest issue is the sharp increase in interest rates, which makes borrowing more expensive. This should hurt these cyclical sectors as they tend to be debt financed. But how deep will these sectors actually decline?

One ameliorating factor is that the expansion prior to the pandemic was very conservative from the perspective of spending on these cyclical investments (the share of the economy used on these sectors remains below trend). This is one reason why the last expansion was both moderate from a growth perspective, but also long lasting—call it the tortoise expansion. There was a small pop in activity for durables and business equipment that occurred post-pandemic in response to the excessive stimulus being deployed by Federal policymakers, but that was of very short duration, without the time typically needed for a large buildup of excess stock or capacity.

Consider, for example, the number of new cars for sale in the nation today, currently just above 100,000 (typically they are 7 to 11 times more than this). The inventory-to-sales ratio is .55, one-fourth its normal rate. What this means is that any slowing in demand will simply allow the sector to start catching up rather than leaving the industry, it as it might under more normal circumstances, with a huge excess stock of cars that could suppress new production (and hence employment and consumer spending) for years. Spending on business equipment may be impacted by interest rates, but at the same time it is being supported by another shortage in the U.S. economy—a shortage of available labor.

On the construction side, despite the cooling of the housing market due to higher interest rates, the share of vacant homes in the United States is still at a record low level, and while the month’s supply of available new homes on the market is high, the supply of existing homes remains near a record low. This has led to an odd circumstance: even as home prices fall, asking rents for apartments continue to rise. Moreover, good financial characteristics (clean debt markets and a very low debt-to-equity ratio) mean that the housing sector will not see any significant increase in foreclosures. All of this again suggests that it is highly unlikely we’ll see the kind of protracted decline in investment in new residential structures that could set off a recession.

While 2023 is unlikely to be a good year for growth, without excess stock within these cyclical components, it is difficult to imagine any large, protracted declines in overall economic activity. This, in turn, suggests that the chance of a recession in 2023 is highly exaggerated and implies that the Fed might just get the so-called ‘soft landing’ they are hoping for. This shouldn’t suggest that the Fed has been well run under the current leadership, but only that the same ‘miserabilist’ forces that have warped Fed policy in recent years (‘miserablism’ is a term coined by Beacon Economics that refers to the overly and irrationally negative perceptions and interpretations of economic activity regularly propagated by many in the media and, in turn, widely accepted by the public and policymakers) have also seemingly suppressed the irrational exuberance that typically lies at the heart of business cycles. Ironically, the fear of recession is actually preventing a recession rather than causing it, as pundits often suggest could happen.

Of course, it is possible the nation could see a recession this year as there are unknowns. If the Fed continues to push interest rates up in a largely futile effort to constrain inflation, they may eventually create enough pain to cause a recession. This remains the biggest short-run risk—albeit a low one given the excessive focus on labor markets. As for longer term, there could be new imbalances forming within the economy right now. For example, the U.S. consumer might start picking up new debt to maintain spending at an excessively high level (note that there has been a decline in the U.S. savings rate). But these types of trends would have a relatively long runway before they become toxic to the current expansion.

So… all in all, in the year ahead, expect to be surprised largely by the lack of surprises.